In the next few months, I plan to share more about my trip to Greece in October…this is the first post of many that will hopefully convey a bit of what we saw at the refugee camp outside of Thessaloniki. I hope by sharing these stories, I can help raise awareness for the Syrian people who have fled their war torn country looking for a better life for themselves and their children. For more information please visit the the Bê Sînor – Sinatex Cultural Center on Facebook.

As we drove to the Bê Sînor – Sinatex Cultural Center (the refugee camp I visited in Greece in October), we chatted with our cab driver. A kind man, he even stopped at a cafe on the way because he noticed I didn’t have a frappe (an iced coffee drink that’s super popular in Greece) and wanted me to have one. We talked about the city where we were staying and he told us about his teenage son. Soon the topic moved on to where we were headed…the refugee camp outside of town in the old textile factory. He was kind, but firm about the challenges facing his country as they deal with the ongoing economic and refugee crises there simultaneously. Greece is in extreme financial peril, and yet, due to their geography and location across the sea, they have taken in more refugees from Syria (and Africa) than any other nation in the European Union. They have the least in terms of resources to support this influx, and yet, the boats still come.

I could sense his frustration and while I didn’t agree with everything he was saying, I understood why he felt the way he did. He said he didn’t understand why we would come visit his beautiful city, just to head out the camp, where no Greeks visit. He shook his head in disbelief, but drove us to our destination, and then promised to return to get us later in the day. 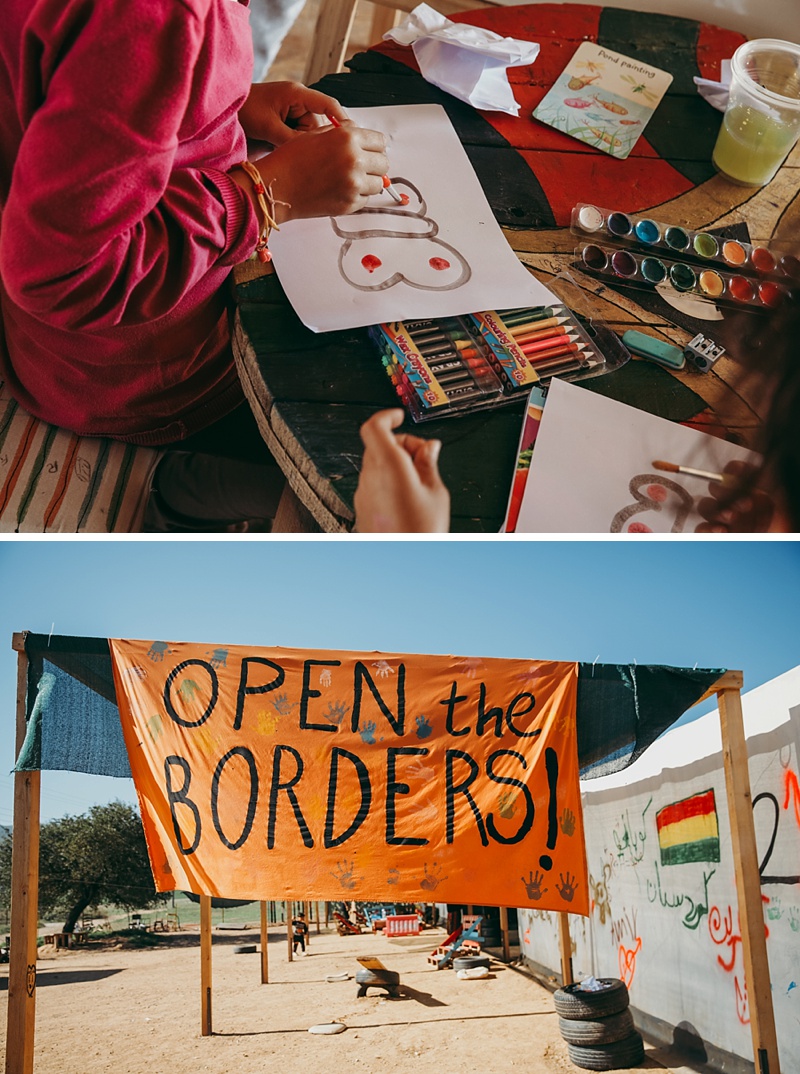 That day was one I will never forget, but one of the most significant moments in my memory is when my friend Theresa was interviewing a few of the teachers for her research project. The kids immediately noticed the teachers were sitting down to talk with Theresa, so they ran over (as all kids would) to figure out what was going on. As I saw the teachers struggling a bit to concentrate on Theresa’s interview with kids hanging on their every word, the old camp counselor and coach in me came out, and I started playing with the kids to distract them. We played hide and seek, did puzzles, painted and threw around a football. One sweet girl with huge brown eyes pulled me over to a quiet spot on a large rock under a tree, and asked me to hold a knotted end of string. She started braiding, carefully and slowly, little fingers making sure every move was perfect. She asked me where I was from, if I was married, and if I had any kids of my own. She wanted to know my kids’ names, and then she repeated them over and over…their American names foreign to her ears and tongue. She held my hand for the most of the afternoon, and whenever she had a free moment, she stopped to work on the bracelet she was crafting out of string. “For you,” she said. 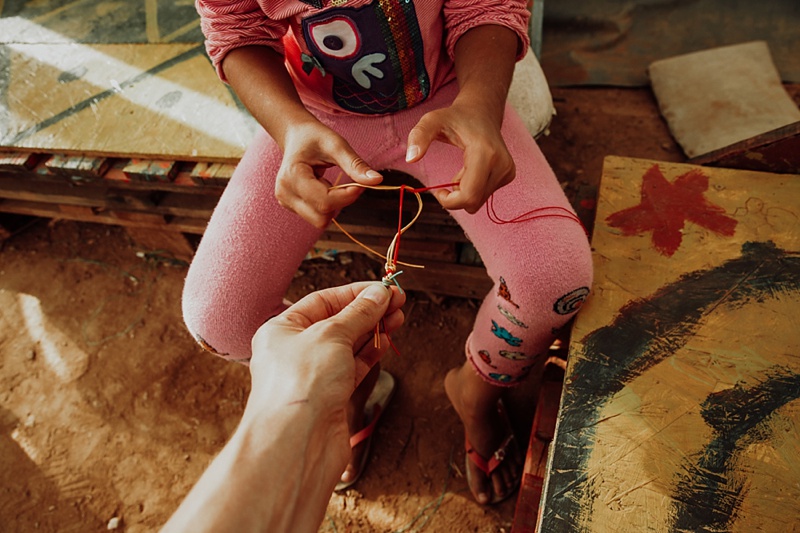 Before we knew it (and honestly, before I was ready, even though it was almost dusk) we saw the cab driving up the dirt road to pick us up. The sweet girl tried to finish the bracelet as quickly as possible so I could take it with me, and while she worked, the cab driver got out of the car and waved at us. As we gathered our things and headed toward the car, my new friend followed me. I loaded up my belongings, and she ran over to hug me, kiss my cheeks, and thank me for telling her about my life. She handed me the half-finished bracelet and I promised her I’d finish it up and wear it, always.

The cab ride home was quiet. Our driver’s mood and energy was completely different. I could tell seeing the children, especially my interaction with the little girl, had affected him. His words were kind. He spoke of the refugees in a different way on the drive home. He asked questions about what we saw. He softened. We were quiet.

Today I wear my bracelet with pride. I brought home the unfinished project, and completed it at my kitchen table, with my own children by my side. Right after the election, I noticed it had fallen off and I couldn’t find it anywhere. I was devastated…but when I texted Theresa to tell her how sad I was that the bracelet was gone, she simply replied with, “But your heart is there.”

She is right. As always. My heart is there.

A week ago I found my bracelet, hidden just under my bed. I am wearing it again, and I hope it will always remind me of the sweet girl with the brown eyes…who not only gave me a beautiful gift, but softened the heart of a kind man with nothing but a small act of love.