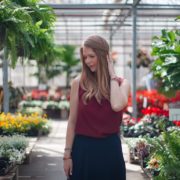 There are days when I wake up and know exactly what I want to do with my life. I want to help people. I want to make a difference. I want to create change.

But then there are days when I just want to wake up and feel nothing. To feel numb and empty. Because maybe it would be easier.

Four years ago I decided that numb wasn’t worth it. Sure, there were days when it felt easier, but I was never going to be able to get where I needed to go if I couldn’t feel anything. I know that I am very sensitive. I’ve been told that all my life, mostly by people who wanted to relieve their own guilt for being cruel.

“You’re too sensitive.”
“I didn’t mean it like that. Why are you so emotional?”
“You take things too seriously.”

And I believed them. I believed that I was broken and wrong, so I built up my armor so no one would be able to hurt me again. My armor was made of humor and sarcasm and wit. I fought the world with my words and my brain. I had to be the smartest person in the room, so no one could tell me (again) that I was doing it wrong. I had to be the best. There was no second place in my world.

Armor is not permanent. It gets rusty and after a while a few screws loosen up. Before you know it, you’re standing in front of a firing squad and all your defenses are gone. You have no skills, no way to escape.

So, you just decide to stop the fight. It is the worst moment of your life.

It is the best moment of your life.

The last four years have been long and short. I look at my kids, and see how quickly it passed. Four years is a blink of the eye and they’ve grown a foot. My diaper-clad toddler now plays soccer and can do math. My 1st grader with the lisp and the missing teeth now fits into my flip flops. They don’t remember what I was like before, and that is a gift.

This past year I have watched as the world has seemed to fall apart around me. I saw hopelessness, fear and anger like never before. I have seen it and KNOWN what to do. Because I’ve been through all of this before.

When I got sober four years ago I couldn’t imagine handling conflict with grace, speaking up when it’s unpopular or being kind to those I disagree with. But as I’ve moved through recovery, I learned. My tiny piece of the world split into a million pieces and I had to bring it all back together. I learned how to disagree, to love, and to speak out. I learned that fear is NOT the boss of me. Fear can fuck off, frankly. I became open about my sobriety and my journey and I found that I have nothing to fear.

I don’t know…I don’t really believe all things happen for a reason, but maybe sometimes they do. Maybe I had to go through all that pain and suffering so I could be the person I need to be in the world we are living in now?

Maybe I had to get sober four years ago because the world needs sober Megan more than ever.

Maybe this is how we change everything.

“I am the one thing in life I can control. I am inimitable, I am an original. I’m not falling behind or running late. I’m not standing still, I am lying in wait. Life doesn’t discriminate between the sinners and the saints. It takes and it takes and it takes, and we keep living anyway. We rise and we fall and we break and we make our mistakes. And if there’s a reason I’m still alive, when so many have died, then I’m willing to wait for it.” – Aaron Burr,
from “Hamilton: An American Musical”

The Great Debate : Podcast vs Vlog