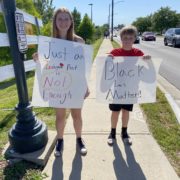 I am incredibly grateful the organizers of this event asked me to speak. I have been struggling with how to use my voice in this time in our country. As someone who has been involved in social justice for many years and has never been one to stay silent, the last few weeks have been a reminder to me of the importance of stepping back and listening. I am sometimes asked why I haven’t run for political office yet, and often my response has been “I don’t think our community needs another privileged White lady telling them what they need, I’d much rather support a female candidate of color.” I felt the last thing that these amazing, impactful protests needed was another cis-gender, straight, suburban, White women saying anything. But when the leaders of the Social Justice March for Educators reached out, they told me how important it was to them for us to speak out and speak the truth. They told me how impactful it would be to have someone who isn’t a minority speak up for Black students, teachers and families in our District. And while I do not want to center myself (I have much work to do), I hope seeing this will inspire some of my White friends to do the same. Maybe you don’t need to be speaking out in front of a crowd at the microphone, but speaking out in your own circles…to friends, to your kids, to family, at work. We won’t be perfect. You might say the wrong thing. You may get called out by a Black friend or colleague because you screwed up. I screw up all the time. That’s when you say, “thank you for teaching me, I will continue learning and will do better next time.” Then you take the time and initiative to learn, so you can be better and keep speaking out.

But not saying anything because you’re scared…it’s not good enough. We have work to do. As an educator said yesterday, now is the time to use your outdoor voices.

Special thanks to the organizers of this event, particularly Dr. Janet Carter who invited us to speak. It was an honor and I am so, so grateful.