Lulu turns four years old this week, and I would like nothing more but for the world to just stop turning. For her to stay three forever. For her to tell me that I’m a super-mommy and that we’re the same because we both have blue eyes. For our frequent performances of her schoolday, as told in song and dance, in our kitchen to never end. For our early morning meetings, eyes puffy and cheeks red from snuggling into her pillow, to go on for years.

For her birthday, Trent and I are getting Lu her first two-wheeler. Pink and purple with streamers on the handlebars and a pretty basket on the front. Just like she wants. Because she’s gonna be four, and four year olds don’t ride tricycles.

But for every part of me that wants to hit pause, the good side, the wise side, tells me that pause won’t help me now. She’s growing up. Every minute of every day is another minute older.

When I think of who she was as a baby, who she was at two and then three…I get excited for four. For me at least, she only gets better. More fun, more lovely, more amazing.

So I’m choosing to embrace the play button instead. 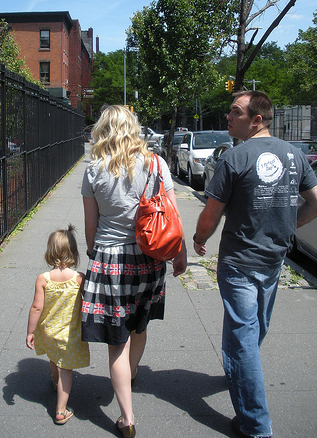