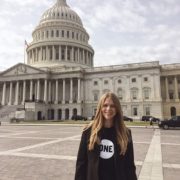 Success is where preparation meets opportunity.

I’ve heard that quote a thousand times, but until the the past few months, I really had no idea what it meant! I know I have been a bit quiet on the blog, but if you’ve been following me on social media, you probably know it’s been ANYTHING but quiet in my life! I am so grateful for all the opportunities that have come my way in the past few months, each one seems greater than the last, and all of them feel destined to happen. I am a person who likes to have a good, solid plan before I do just about anything. I don’t think anyone would describe me as spontaneous, but lately, I feel I’m just going with the flow more and more, and it’s been pretty incredible!

Last year I reconnected with the ONE Organization, a group I worked with before I had Tate six years ago. They reached out to see if I’d be interested in volunteering again, and I jumped at the chance! ONE is a global grassroots movement of over 7 million people, who are working to eradicate extreme poverty and preventable disease. I love ONE for lots of reasons, but one of the most significant is that ONE is a bipartisan group. They work with leaders on both sides of the aisle and do not align with any particular party. In times like these, I appreciate their commitment to bipartisanship and cooperation.

This year’s initiative with ONE is focused on the 130 million girls worldwide who are not able to attend school. The program is called Girls Count, and was officially launched last week with an incredible online platform. They are asking people to literally COUNT the 130 million girls, one by one, making the longest movie ever.

A few weeks ago, ONE invited me to their yearly Power Summit, and I jumped at the chance. I spent several days in Washington D.C., learning all about advocacy and government. Another thing I LOVE about ONE is that they don’t ask for anyone’s money…just your voice. They don’t raise funds or donate to causes, they simply work with governments to pass laws that help those living in extreme poverty. At the end of the training, I was fortunate to head up to Capitol Hill, where I met with my representatives in Congress and talked to them about saving the Federal Foreign Aid Budget, also known as the 150 Account. The 150 Account is only 1% of the federal budget, and it provides for ALL U.S. foreign aid…it saves millions of lives and supports the Defense Department in their fight against extremism and terrorism. It was an honor to talk to our representatives in D.C. and see government in action.

Then, last week, on International Women’s Day, I was asked to visit our senators local offices and deliver hand-written letters and a petition signed by nearly 900 Kansans supporting the 150 Account and foreign aid. The Kansas City Star even included me in their round up of International Women’s Day Activities, which was a special treat. I was one of hundreds who delivered messages to their government worldwide! It feels incredible to be part of such an incredible group of people who are working to make our world a better place!

Thanks for following along as I share more about my advocacy work in the next few weeks and months. I’m so excited about the work I’m doing, and I want to share it with everyone! Soon I’ll be sharing about a Kansas-based group I’m involved with, which is working toward electing more pro-public education candidates to local and state offices, and I’m also continuing my work with local refugees. So many people have reached out to me because they want to do something, but aren’t sure where to start. Hopefully these posts will give you some ideas! And if you ever want to reach out personally, I’d love to chat with you about becoming more involved in any of these causes!