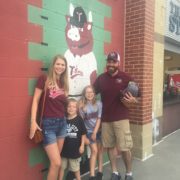 A few weeks ago our little family was fortunate enough to work with the crew from the Kansas City Star on an advertisement for CommunityAmerica Ballpark! The home of the T-Bones baseball team, the ballpark is running a fun special this summer where you can enjoy “dinner and a show” on Saturday nights. And I can tell you, we taste tested just about EVERYTHING that the stadium had to offer for this short ad spot, and it was all Peters family approved! The atmosphere at T-Bones games is so fun, and it’s a great, budget-friendly alternative when you want to get out to a pro baseball game, but don’t necessary want to drop a ton of cash. We had such a good time working on this ad and spending time out at CommunityAmerica ballpark! We will definitely be headed back again before summer is over!

Fun Fact: When we shot this ad, we had just flown into Kansas City from a few days away in Tennessee for a memorial service, so we were totally exhausted. I was worried about the kids keeping it together (even though the spot is short, the filming took a few hours) for the entire time, but the crew did such a great job keeping them excited and engaged. The production assistant even taught Tate how to beatbox, and he’s been running around doing it ever since! Thanks to the team from the Kansas City Star for such a wonderful experience!