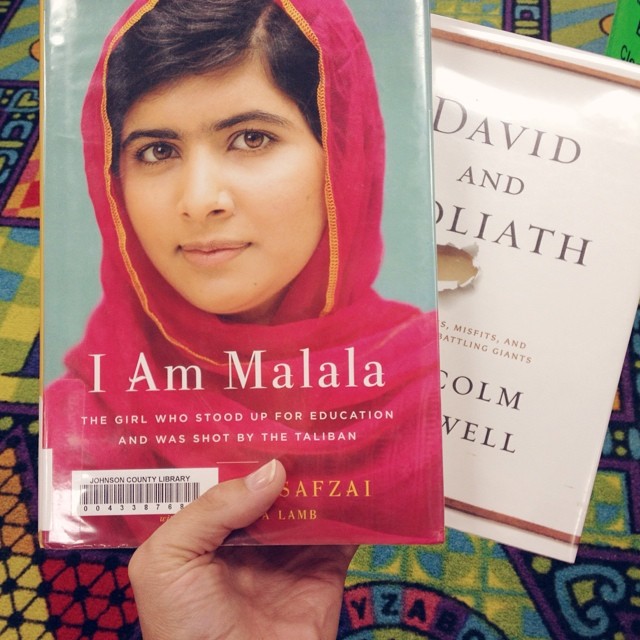 During the past few months I’ve turned into a bit of a bookworm. Our open summer schedule meant many, MANY trips to our local library to beat the heat and gather up some new reading material. Lucy is a speed-reader who goes through several chapter books at a time, so we ended up spending A LOT of our summer hours curled up with our stories. Not only does my local library have an amazing selection, it also offers ebooks, which I can download on my iPad. I’m such a nerd-face, you should’ve seen me when I realized I could get books for FREE! It’s like I forgot how libraries work in this land of Amazon and Barnes & Noble. I ended up mirroring my daughter, going through a ton of books, and staying up all night reading. It was pretty awesome.

One of my favorites was David and Goliath: Underdogs, Misfits, and the Art of Battling Giants by Malcolm Gladwell. I had heard about this book from a few people, and had even attended a seminar where the speaker based his argument on stories included in this collection. The book is a series of essays by Gladwell, a New Yorker columnist and author of a ton of other incredible reads (more here), focusing on the underdogs of society and how they overcame adversity. More specifically, it hones in on how underdogs, in reality, are sometimes nothing of the sort. In the titular essay, Gladwell writes about David, the young shepherd boy who slayed the giant Goliath in the famous Bible story. But was David really an underdog? Or was he smarter, faster and more prepared than Goliath? Did his size work for him, instead of against him? Gladwell is a wonderful writer, and this book was no exception. The section on the Civil Rights Era and the Irish-Catholic resistance against the British are both very intriguing and relate very much to what’s happening in the news right now. I highly recommend it for underdogs (and giants) everywhere.

I also recently finished the autobiography, I Am Malala: The Girl Who Stood Up for Education and Was Shot By the Taliban, by Malala Yousafzai. It tells the story of Malala, who was 15 when her school bus was pulled over by Taliban fighters, who climbed aboard and shot her. Malala was the writer of an online journal for the BBC, which told of her struggles in trying to continue attending school after the Taliban took over her home in the Swat Valley of Pakistan. Her story is definitely worth reading. This book reminded me a bit of Anne Frank, the journals and memories of a young girl living thru a war, with stories about fights with friends and being angry at her brothers mixed in with tales of Taliban fighters roaming her town and threats against any girls attending school. It is heartbreaking and uplifting, as Malala continues to fight for education for girls, even after surviving such a terrifying ordeal.

The world is a scary place today. I watch the news and see the happenings in Ferguson, Missouri and Mosul, Iraq. I don’t know what to make of a world where an unarmed boy is shot by police or children are murdered for their religious beliefs. I don’t know how I can help or what I can do. But books like these make me think a better world is possible, and there are people that are working to get us there. When I read, I am growing, and with growth, I believe I can be inspired to find a way to help. Let’s keep learning, friends. Let’s keep growing.

We May Contribute a Verse Growing Up Mobile: 4 Ways to Manage Screentime with Small Kids
Scroll to top